The signs are clear: the great epidemic is fading away. An additional symbol of hope accompanies this good news. New heroes are emerging from the shadows to rekindle the strength of the nations of this stripped continent. The stories that circulate reveal extraordinary individuals who all share the belief that they hold great secrets that can radically change the fortunes or progress of nations. Even if the outcome of their adventures is not yet completely fixed, all credible diviners confirm that in case of victory, these heroes will deliver what they promise.

However, at the moment, these heroes are aware of only a few fragments, among the whole of the revelations buried deep within their minds… They will surely learn more with the passage of time and their mounting success. For the time being, this at least gives them a broad understanding of some of the coveted benefits and the way in which they would be able to release the missing information in order to accomplish their goals. They already know that they will be forced to embark on identical quests, their trajectories inevitably leading them to collide with each other. Those who fulfill their destiny will simultaneously doom their counterparts to failure.

Following the Bal Pourpre festivities, participants showed their support for one of the eight heroes. Guilds wishing to act as military councils (états-majors) for a hero during the week of the Grande Bataille may write to the hero until July 17th to convince him to give them this responsibility (maitredejeu@bicolline.org or by delivering a decorum “courrier ducal” at the Campaign/Ducasse on July 17th) . Of course, the heroes’ earnings will be shared with them!  Within the highest spheres of occult experts, the circulating rumors suggest the Guardians of Knowledge (Gardiens du Savoir) are tied to this conflict.

From now on, Ergor Gruk and Korban Ir know they’ll fight for the same objectives during the great battle of Thursday the 11th.  These heroes’ main target is the control of the ruins of Arta Morna’s fortress.  This famous location will finally deliver its greatest mysteries, and its greatest treasures, which have remained inaccessible until now because of the magics previously hiding them.

The same goes for heroes Lukr Bouclier-de-Feu and Sidille Rkakzik for the great battle of Saturday the 13th.  Their target is nothing less than the control of the new monolith, erected to replace that of Tolternoth.  Its power currently being at its pinnacle, the possibilities are many, and often defy imagination. 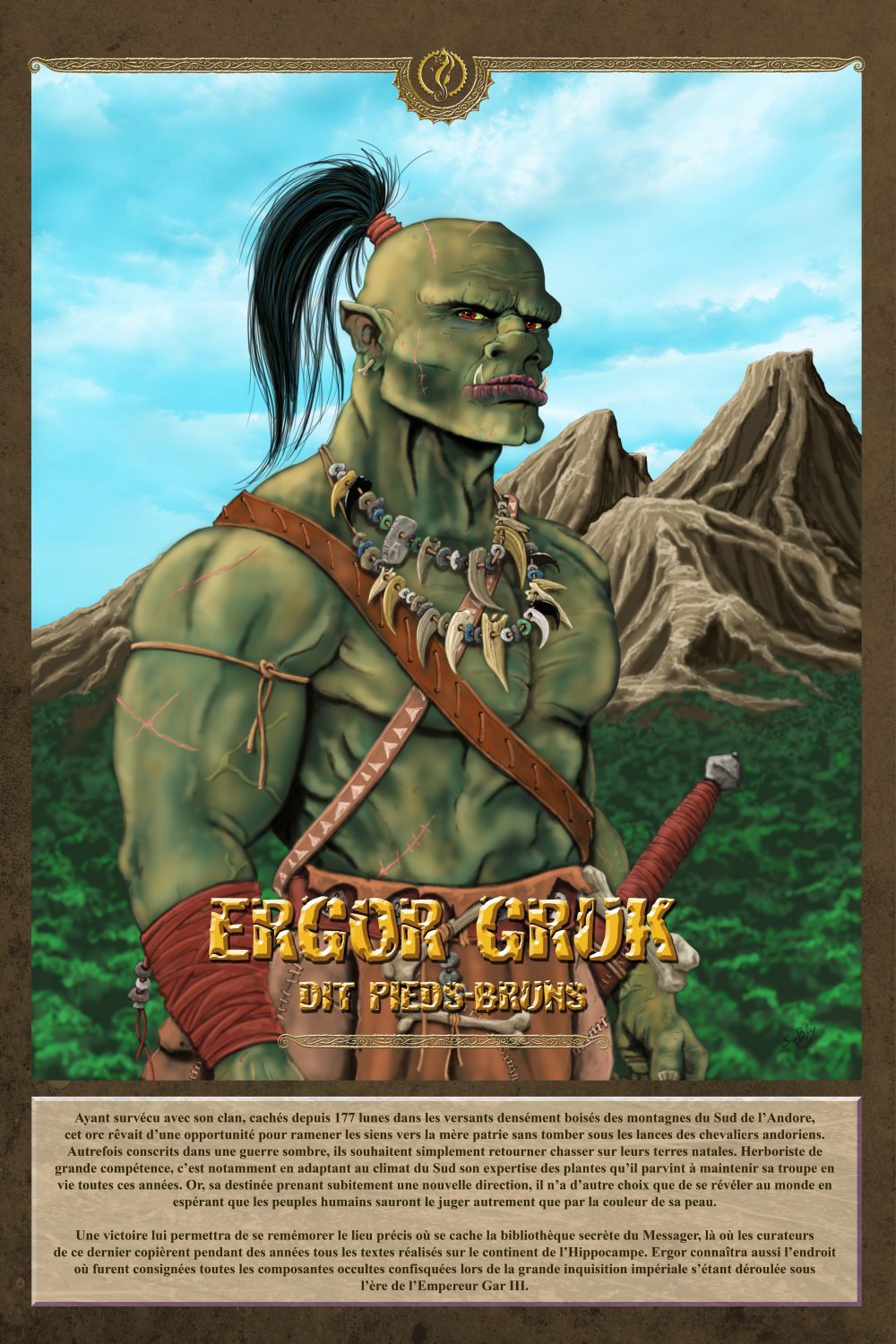 Having survived with his clan, hidden for 177 moons in the densely forested mountain slopes of southern Andore, this orc dreamed of an opportunity to bring his people back to their homeland without falling under the spears of Andorian knights. Once conscripted in a dark war, they now simply wish to return to hunt in their native lands. A highly skilled herbalist, it was by adapting his expertise in plants to the southern climate that Ergor Gruk managed to keep his troops alive through the years. Now, with his destiny suddenly taking a new direction, he has no choice but to reveal himself to the world in the hopes that the human race will not judge him only by the color of his skin. A victory at the great battle of Thursday will allow him to remember the precise location of the Messenger’s secret library, where the latter’s curators copied all the texts produced on the known continent for years. Ergor will also know the place where were stowed the occult components confiscated during the great imperial inquisition that took place during the era of Emperor Gar III.

This fairy has not had an easy life, coming from a family that was targeted by a curse several millennia ago. The fairies in this family were cursed with not being able to make honest acquisitions. Thus, over time, they learned to con, betray, and steal in order to get their hands on the commodities that they could not produce themselves. This condition led them to survive mainly by gravitating towards underground organizations. Korban works mainly as an expert in illicit substances and, among his alchemical productions, he concocts the best poisons that can be found on the continent. Recently, the moral aspect of the curse that weighed on him was suddenly lifted at the same time as secrets were deposited in his subconscious. A victory at the great battle of Thursday will allow him to recall the precise location of the archives of a powerful magician from an ancient era, containing the prodigious incantations that would allow a place that once sank to the bottom of the sea to rise again. Korban will also know the location where a large quantity of platinum collectibles has been hidden away. 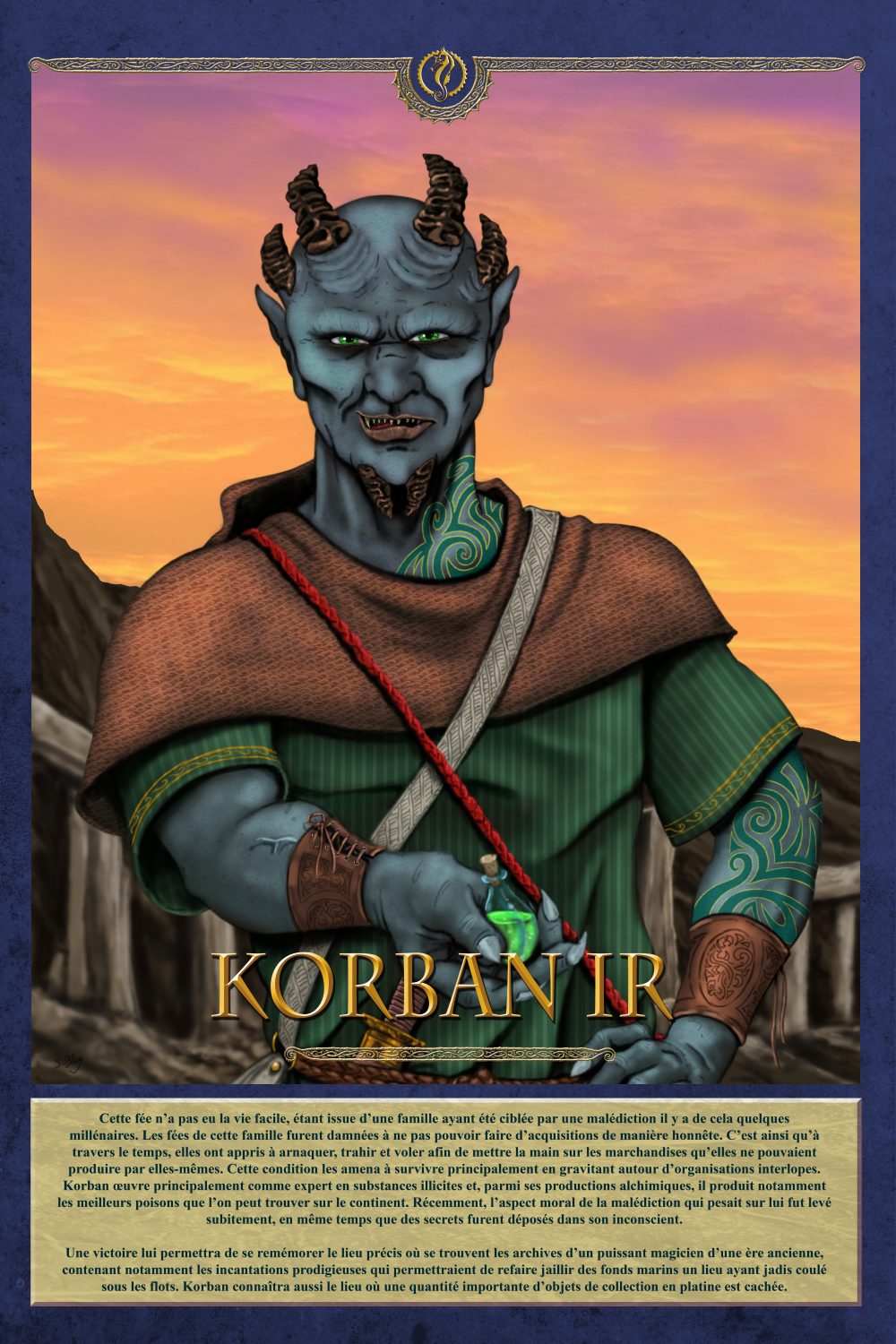 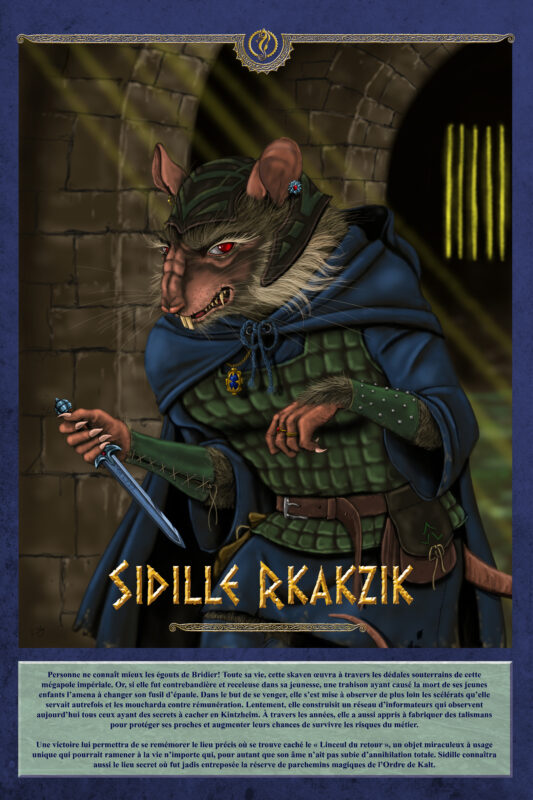 No one knows the sewers of Bridier better! All her life, this skaven has worked her way through the underground mazes of this imperial megalopolis. Sidille Rkakzik was a smuggler and fence in her youth, but a betrayal that caused the death of her young children led her to change her ways. To avenge her family, she began to watch from afar the scoundrels she once served and snitched on them for a fee. Slowly, she built up a network of informers who today observe all those with secrets to hide in Kintzheim. Over the years, she also learned to make talismans to protect her loved ones and increase their chances of surviving the risks of the trade. A victory at the great battle of Saturday will allow her to remember the precise location of the “Linceul du retour”, a miraculous single-use object that could bring anyone back to life, provided their soul has not been totally annihilated. Sidille will also know the secret location where the Order of Kalt’s magical scrolls were once stored.

This dwarf comes from the underground abysses where rivers of lava flow, approximately under the mountains of the Dulgare Plateau, but at a depth defying all logic. Very isolated from other peoples, these dwarves are not used to interacting with beings different from themselves. In his community, Lukr’s role is that of “supreme guardian”, meaning that he is responsible for ensuring that the hellish creatures naturally drawn to their territory do not attack the dwarves living there. In particular, he is the creator of the sigils that keep these foul beings at bay. Moreover, he has a vast knowledge of an underground world that few people suspect exists. A victory at the great battle of Saturday will allow him to recall the precise location of the work of a genius who died too young, revealing an innovative technology that would increase the capacity of a fortification. Lukr will also know the location of an important gold deposit that is as of yet unknown. 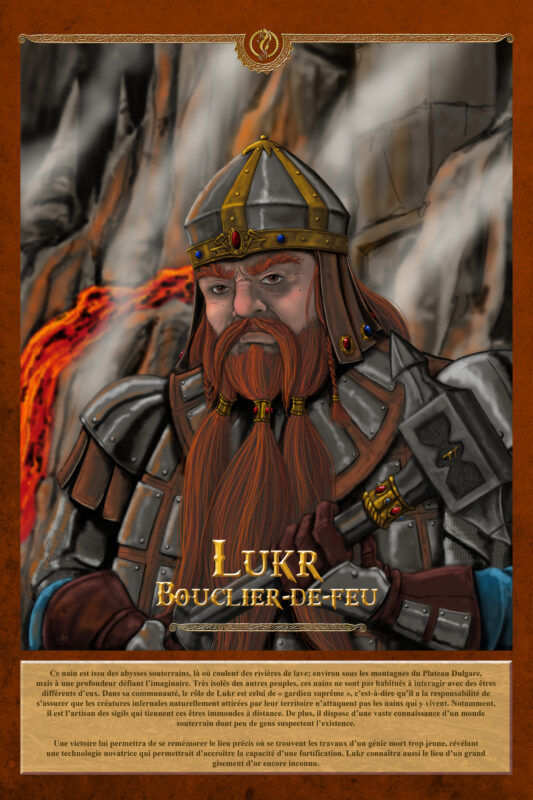